Read on the Press Democrat

Sebastopol is forging ahead with a ban on polystyrene foam food and beverage containers, taking the lead in Sonoma County amid a nationwide concern about single-use plastics and a mounting global crisis over consumer waste.

The new ordinance, the first of its kind in Sonoma County, prohibits the sale or use of disposable cups, burger boxes, clamshell containers and even cheap ice chests made of expanded polystyrene in Sebastopol come Nov. 19. The regulation is based on a model intended for adoption around the county.

Among numerous other provisions, the wide-ranging measure also requires vendors to ditch single-use containers, bowls, plates, cups, straws, stirrers, utensils, napkins and other products of any material when viable compostable or recyclable alternatives are commercially available. Customers who want to-go condiments, cup lids, cutlery or straws will have to ask for them, as well.

The ordinance encourages food providers to credit customers 25 cents for bringing their own reusable to-go containers and charge a takeout fee up to 10 cents to defray the costs associated with cups, lids, straws or utensils.

The Sebastopol City Council adopted the model ordinance in March but delayed its enforcement to allow restaurants and vendors to use up any remaining foam stock they might have on hand and to give the rest of Sonoma County time to catch up.

But Vice Mayor Patrick Slayter, a member of Sebastopol's recently created zero waste subcommittee, said the council saw no point in waiting to act, given the well-known environmental harm caused by blown polystyrene, often referred to by the brand name Styrofoam. The only other local entity poised to act is Windsor, which reportedly will consider the ordinance in August.

The city's ordinance is based on a model regulation the Sonoma County Waste Management Agency Board presented in December to the Board of Supervisors and the county's nine cities as part of a movement intended to reduce waste by more than 90 percent.

It also reflects a larger effort to eliminate single-use plastics in the waste stream in Europe and the United States due to expanding awareness of the pervasiveness of plastic waste in every corner of the planet and its ingestion by every type of animal life-form.

Supporters doubled down this year, however, with a broader approach aimed at phasing out nonreusable, nonrecyclable, noncompostable packaging of all kinds and requiring the top 10 most littered single-use plastic products be reusable, recyclable or compostable after 2030.

Matching bills, Senate Bill 54 and Assembly Bill 1080, would accomplish both aims. Ironically, though they go well beyond simply banning polystyrene foam, they have earned more votes in their houses of origin, said Mark Murray, executive director of Californians Against Waste.

It's a more logical approach, Murray said, because communities or companies that have eliminated polystyrene foam have turned to other materials that are still nonrecyclable, nonreusable, nonbiodegradable, and do nothing to reduce the waste stream. Specifically requiring the use of compostable, recyclable materials addresses the problem straight on, he said.

The new legislation would expand on that.

The powerful, trillion-dollar-plus plastics industry is opposed to the matching bills.

Lawmakers still want to work out some wrinkles in the bills, even those who “voted for it ... to keep the conversation going,” said Eric Potashner, vice president of strategic affairs for Recology, the waste management company that serves much of Sonoma County.

“The plastics industry is going to spend a lot of time on trying to defeat these bills in the next month or two,” Potashner said. “All of that said, I think we have better-than-a-fighting chance of getting this done this year.”

Recology general manger Fred Stemmler cuts in to a bag of foam that was thrown in to home recycling by a homeowner, to make sure there is nothing non-recyclable in the bag. Kent Porter / The Press Democrat

Workers sort out all types of recyclables including garbage and styrofoam, discarded by homeowners in to recycle cans, at Recology in Santa Rosa. Misters are used to keep the dust down as the materials are sorted. Kent Porter / The Press Democrat

Recyclables are scooped up for sorting at Recology in Santa Rosa, Friday. Kent Porter / The Press Democrat 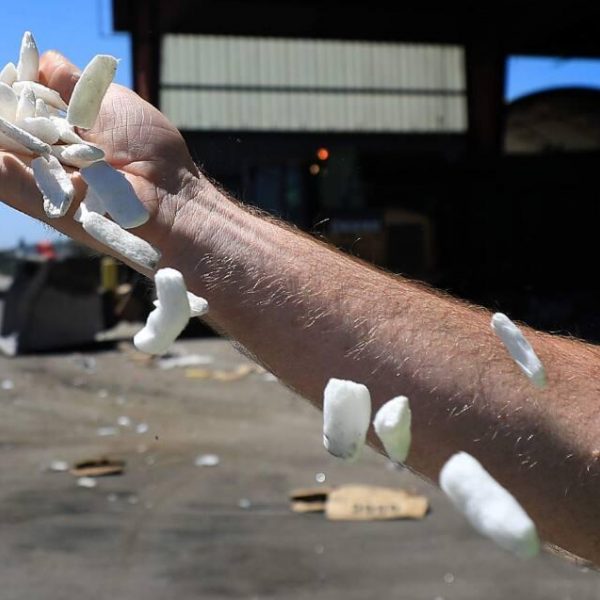 Polystyrene floats in the breeze at Recology in Santa Rosa. Kent Porter / The Press Democrat

In the meantime, expanded polystyrene is viewed on the local level as “low-hanging fruit” - the first step toward addressing other single-use plastics, according to several solid waste government staffers involved in the discussion.

“Styrofoam has been on people's (minds) for quite some time, for all the reasons we know,” said Santa Rosa City Councilman John Sawyer, who represents the city on the county waste management board.

Neither recyclable nor biodegradable, expanded polystyrene has been targeted by environmentalists for decades because of its ubiquity across the landscape and in marine environments. Berkeley first prohibited food packaging using polystyrene foam within its city limits back in 1988.

Citing both health and environmental concerns, Sebastopol, Healdsburg and Sonoma County also approved ordinances as early as 1989 prohibiting the use of polystyrene food and drink containers on local government premises.

Though cheap, lightweight and an excellent source of insulation, the material also is brittle and fragments easily into bits of microplastic that can be mistaken by wildlife for food - often after it has absorbed toxins from the surrounding environment, experts say. Since the material is mostly air, it's blown easily from place to place and hard to capture.

Fred Stemmler, general manager of Recology Sonoma Marin, said workers struggle to contain the stuff at the company sorting facility in southwest Santa Rosa, where fragments of polystyrene foam battered by heavier recyclables in bins and recycling trucks end up as “fractured pebbles of polystyrene that the wind just picks up.”

“I watch the stuff just blow around and flutter around all of our facilities” and hide “in virtually every nook and cranny,” Stemmler said.

In addition, questions exist about the chemicals emitted and used in the production of polystyrene, a petroleum-based material, and whether they might leach into liquids and food stored in foam containers.

Polystyrene is made from chains of styrene, a substance identified by the National Institutes of Health as “reasonably anticipated to be a human carcinogen.”

Originally, the lightweight foam version was blown out using chlorofluorocarbons, chemicals linked to erosion of the earth's protective ozone layer.

Many food vendors have made the switch on their own to more environmentally friendly containers, though the cost for compostable or recyclable products is generally higher.

Arnold Arce, operations manager at Sebastopol's El Coronel Mexican Restaurant, said he switched out the eatery's polystyrene products earlier this year after learning the council would take up the ban, just “to get ahead of the curve.”

“It cost us a little bit more, but now there's so much diversity on those products that the price has gone down, so there's no excuse for not making that jump,” Arce said.

“It's not helping me on my bottom line, but it made me feel better that I'm doing a little bit better as far as helping the environment and stopping all the Styrofoam from going into the trash,” Kumar said.

While 120 California cities and counties have now passed some kind of regulation on polystyrene foam food containers, most have done so in the past decade, including Ukiah, Fort Bragg and Mendocino County, all of which passed bans on foam food service ware in 2014.

Photos of the Pacific Garbage Patch and stories of whales, dolphins and sea turtles starving despite bellies full of plastic waste have raised awareness about the massive amounts of plastic waste that wind up in wild places on a daily basis amid surging annual plastic production. New studies indicate only 9 percent of the waste gets recycled.

A World Wildlife Fund-sponsored study released last week said humans ingest enough microplastics each week through water and other substances to equal the volume of a credit card.

“I think that people are becoming more and more aware of the problematic side effects of plastic use and especially single-use plastics - that it's a convenience, but it has some pretty serious consequences when it goes outside of the system that it's supposed to go in; and it's pretty easy for those things to escape into the river and the streams, and then drain into the ocean,” said Patrick Carter, who served as the executive director of county waste management until December, when he took a job as an analyst with the Petaluma Department of Public Works.

Carter said the Petaluma City Council, which is still working to tailor the countywide zero-waste resolution to its taste, may consider the polystyrene ban as early as August, though possibly this fall. Speaking as the county's former waste management chief, he said it seems as if the public and community leaders are increasingly mobilized by the alarming news coming with greater frequency about the amount of plastics in the oceans and elsewhere.

“People are trying to figure out what they can do about that, because I don't think anybody relishes the thought of these things really degrading our environment; so they're just trying to find their way,” Carter said. “This (the polystyrene ban) is maybe not the only way to solve that, but it's a piece of the puzzle.”

To read the entire Sebastopol ordinance go to sebastopol.municipal.code and search for “polystyerene.”

You can reach Staff Writer Mary Callahan at 707-521-5249 or mary.callahan@pressdemocrat.com. On Twitter @MaryCallahanB.